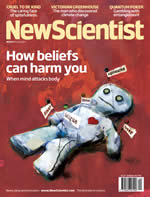 The idea that believing you are ill can make you ill may seem far-fetched, yet rigorous trials have established beyond doubt that the converse is true – that the power of suggestion can improve health. This is the well-known placebo effect. Placebos cannot produce miracles, but they do produce measurable physical effects.

The placebo effect has an evil twin: the nocebo effect, in which dummy pills and negative expectations can produce harmful effects. The term “nocebo”, which means “I will harm”, was not coined until the 1960s, and the phenomenon has been far less studied than the placebo effect.

What I find interesting but not surprising is that this is a yin-yang pair, good and bad, in both cases the mind affects the body. The nocebo effect can also explain how voodoo works:

What we do know suggests the impact of nocebo is far-reaching. “Voodoo death, if it exists, may represent an extreme form of the nocebo phenomenon,” says anthropologist Robert Hahn of the US Centers for Disease Control and Prevention in Atlanta, Georgia, who has studied the nocebo effect.

The article gives an example of a person who was told that he was terminally ill and died within the said timeframe. It was then found out that the diagnosis was wrong, still the person and those surrounding him believed in it and acted/reacted as if it was true. Mind attacked body.

Despite the growing evidence that the nocebo effect is all too real, it is hard in this rational age to accept that people’s beliefs can kill them. After all, most of us would laugh if a strangely attired man leapt about waving a bone and told us we were going to die. But imagine how you would feel if you were told the same thing by a smartly dressed doctor with a wallful of medical degrees and a computerful of your scans and test results.

I find this connection between mind and body very interesting. I know the good effects from yoga and meditation, this is the darker side of it.