I am coach and mentor. Like most small companies, I’m self-employed, one issue is to make potential clients find me. Another issue is how to stand out in the crowd. There are lots of coaches and mentors, how can I be different and make a difference? 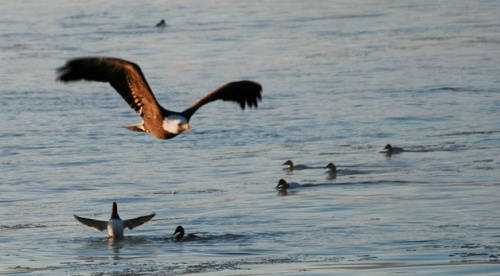 Yesterday I came across Be an Eagle, not a Duck, a great story posted by Keith Stoeckeler that’s on a related topic. The story is about Wally the Cab Driver and how he changed his business. As Keith said: “Small changes can make a large impact.” Wally got his inspiration from a quote by Wayne Dyer:

Differentiate yourself from your competition. Don’t be a duck. Be an eagle. Ducks quack and complain. Eagles soar above the crowd.

Wally the Cab Driver made a choice. He decided to stop quacking like ducks and start soaring like eagles. He put in a few changes at a time, gradually improving his business.

I intend to soar with the eagles. What about you?

Wally the cab driver in the Eagle or Duck story above had this Mission Statement:

To get my customers to their destination in the quickest, safest and cheapest way possible in a friendly environment.

That mission statement is short and to the point, easy to understand and also fairly easy to measure. It reminds me of this quote:

@Amy Stark recommended that I should take a look at Convince & Convert. I liked it, subscribed and decided to follow @Jay Baer. Then Jay tweeted about @Keith Stoeckeler and the story above.

I rarely join courses or forum on the internet because they mostly feel off target for me. The concept of The Third Tribe feels right though and many in the list of names above are people whose blogs I follow. I have signed up and joined The Third Tribe, it will be very interesting to see what comes out of this.

Over the last several years, online marketing has been split into two opposing teams. Two tribes, if you will.

One tribe is called the Internet Marketers. They use aggressive hype and obnoxious tactics to fool people into believing there really is a “get rich quick” magic bullet.

The other tribe is the Social Media Cool Kids. They reject hype and aggressive sales tactics in favor of relationships, community, and value . . . and yet seem to have taken a vow of poverty along the way.

The black and white division of online marketing into two tribes is not real. There’s a big (and growing) middle tribe, one that avoids spammy IM approaches while having no problem asking for the sale and making money. This is the Third Tribe.

What do I think about Inside Third Tribe?
The Third Tribe is an interesting and great concept:

The Third Tribe is a private community where like-minded people help each other out. It’s based on a combination of education and interaction that takes everyone’s Internet marketing skills to a higher level.

The education part so far contains The Quick Start Guide to Making Money Online with Johnny Truant and interviews on Building a Business around a Blog with Chris Brogan, Darren Rowse and Brian Clark. The forums are active and people willingly share their experience. In short, it’s great value for money if you’re set on improving your Internet marketing skills.

Third Tribe Marketing has started an affiliate program that’s only open to members. That’s professional, only members know the value of what they are promoting.

If it’s that great, why do I leave?
One of my goals for 2010 was to take my blogging and Internet marketing skills up a notch (or more), to make it more professional. Those who follow my blogs might have noticed that it did not turn out well, posts have been random and I don’t blog on a regular basis.

I have realized that the aim of becoming more professional as blogger turned writing into a must, at the level of dusting my apartment, instead of something I want to do and love to do. My solution is to remove pressure, scratching the goal as blogger and to focus on bringing the fun back to my writing. I leave Third Tribe Marketing because it does not suit me now, where I am with my blogging and where I want to go in the near future.

Today I attended a seminar arranged by Ledarna in cooperation with IHM Business School. Brit Stakston from JMW Kommunikation had a very interesting and informative presentation about Social media.

Social media is about relationships and storytelling. Brit also talked about digital presence which is much more than just having your own homepage. My own digital presence is fairly large, see my sites and my profiles, but I still got things to consider. I’ll probably rearrange some of my content in order to strengthen my over all profile.

Marko Saric at HowToMakeMyBlog writes about 9 reasons why Mashable rules the social media. It’s a great post since it list and explains nine reasons which gives you a chance to see what might work for you and your blog.

Under reason eight it says:

There is original reporting and there is curation, which is just as hard, saying, “This is what’s out there, this is why it is important.” Both have their places, and it’s not a case of either or.

I came across this on Twitter, shit creek consulting. Hugh MacLeod writes that ‘The name of their company implies they have a lot of attitude. They wanted a cartoon that conveyed this.’ And they got it, check the link above.

Shitcreek Consulting has a nice looking homepage that explains their business concept. They sum it up as:

This is Shitcreek Consulting… the guys you call when you find yourself up Shitcreek without… well, a paddle.

You see a handsome guy at a party. You go up to him and say, “I’m fantastic in bed.”
— That’s Direct Marketing.

You’re at a party with a bunch of friends and see a handsome guy. One of your friends goes up to him and pointing at you says, “She’s fantastic in bed.”
— That’s Advertising.

You see a handsome guy at a party. You go up to him and get his telephone number. The next day you call and say, “Hi, I’m fantastic in bed.”
— That’s Telemarketing.

You’re at a party and see a handsome guy. You get up and to straighten your dress. You walk up to him and pour him a drink. You say, “May I,” and reach up to straighten his tie brushing your breast lightly against his arm, and then say, “By the way, I’m fantastic in bed.”
— That’s Public Relations.

You’re at a party and see a handsome guy. He walks up to you and says, “I hear you’re fantastic in bed.”
— That’s Brand Recognition.

You’re at a party and see a handsome guy. You talk him into going home with your friend.
— That’s a Sales Rep.

Your friend can’t satisfy him so she calls you.
— That’s Tech Support.

You’re on your way to a party when you realize that there could be handsome men in all these houses you’re passing. So you climb onto the roof of one situated toward the center and shout at the top of your lungs, “I’m fantastic in bed!”
— That’s Spam.