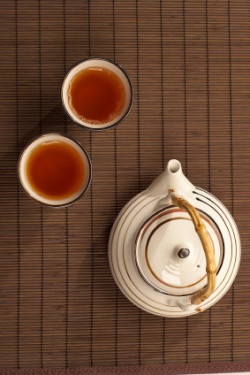 The teacup story is around in different versions, here is one version:

Once, a long time ago, there was a wise Zen master. People from far and near would seek his counsel and ask for his wisdom. Many would come and ask him to teach them, enlighten them in the way of Zen. He seldom turned any away.

One day an important man, a man used to command and obedience came to visit the master. “I have come today to ask you to teach me about Zen. Open my mind to enlightenment.” The tone of the important man’s voice was one used to getting his own way.

The Zen master smiled and said that they should discuss the matter over a cup of tea. When the tea was served the master poured his visitor a cup. He poured and he poured and the tea rose to the rim and began to spill over the table and finally onto the robes of the wealthy man. Finally the visitor shouted, “Enough. You are spilling the tea all over. Can’t you see the cup is full?”

Here is another version:

Nan-in, a Japanese master during the Meiji era, received a university professor who came to inquire about Zen.

Nan-in served tea. He poured his visitor’s cup full, and then kept on pouring. The professor watched the overflow until he no longer could restrain himself. “It is overfull. No more will go in!”

Like this cup, Nan-in said, you are full of your own opinions and speculations. How can I show you Zen unless you first empty your cup?

I like the tea story a lot, it is a great reminder that in order to learn we have to be humble, to empty our mind and make room for the new.

Here are some quotes about learning, I love the one about beginner’s mind.

In the beginner’s mind there are many possibilities, in the expert’s there are few. – Shunryu Suzuki-roshi

When any real progress is made, we unlearn and learn anew what we thought we knew before. – Henry David Thoreau

20 thoughts on “Your teacup is full (Empty your cup)”