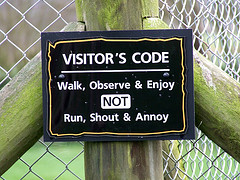 Alex Fayle has a really interesting post today, Taming the Voices in the Personality Zoo. It describes a fun and really useful way to sort out what stops us from achieving what we want.

By assigning each piece of resistance a personality, I can diffuse the internal argument by recognizing the emotion attached to the thought and therefore come up with effective ways to work around or dismantle the particular excuse for not continuing. (It’s also a whole lot of fun!)

Alex links to his own zoo and the Lab Rats (Cat, Jim and Brett) list theirs. It’s an interesting read and I started to list my own voices.

My list include the good ones as well as the not so good ones.

What’s in your Personality Zoo?