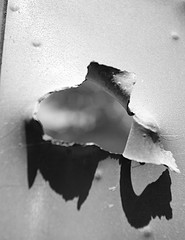 Note: This post refers to an older site of mine, fortyplustwo.com, and Drive-by-Shooting Sunday: Forty Plus Two.

I felt like I had been hit by a truck, my entire body was aching. My brain felt slow, like starting over and slowly getting up to speed. I realised that I lay on the sidewalk but could not remember why. Then I remembered a man pointing a gun at me saying “You want peace, buddy? I’ll bring you peace”. After that everything went dark.

After that darkness I had been somewhere bright and nice, now I was back in my old body. Somehow I had imagined reincarnation as starting fresh with a new body. A well, better a second chance in this one than not being back at all.

I got halfways up, sitting on the sidewalk, and looked around. My place looks a mess, whoever visited it had a fun day at the shooting range. I managed to get up and walked inside. Lots of bullet holes, shattered glass and dust. I walked around, those visitors seemed to have been all over the place. This was not an ordinary shoot and run, somehow there was a strategy behind it.

I noticed something shiny on the floor. I bent down and picked it up, it was a beautiful pen. The pen was not mine and it had not been there before, the hitmen must have dropped it. My brain was coming back to normal, there was something familar with men, pens and drive-by-shootings.

I walked slowly across the room, avoiding the shattered glass. The visitors had not bothered about my office at the back of the house, the door was pale like everything else and they probably had not seen it. I opened and went in, sat down in the chair and started my laptop. Google is a good thing, it turned out that those pen men kept a record of their hits. I browsed down the list and found Drive-by-Shooting Sunday: Forty Plus Two.

The mess they had created meant I had to clean up, fix the holes, paint and make it a nice place. I could restore it just as it had been or take the opportunity to make it a better and more attractive place. I noticed that the pen men, James and Harry, had made a lot of comments in their notes. Well, maybe – just maybe – I should read it a couple of times and see if there were some ideas I can use.

See also: What I learned from Men with Pens

6 Responses to This place is a mess (after the shooting)

I think you just need to be a bit clearer. Like, just a suggestion, if you say “42 — the ultimate answer” many people would know what you mean. But then, you are supposed to be funny as well as philosophical, so be sure that is what you want to do.

I know what that kanji is. You probably do some martial arts, right?

Bengt says September 28, 2008 at 4:52 pm:
@Akemi,
I am not sad, I asked for the review and the pen men left lots of good suggestions. As you say, improving takes time but now I have some professional input for my future work.

I do need to work on the header and tag line, being philosophical can complicate things. No martial arts for me but I am interested in Asian philosophy. The kanji sign that I use stands for Ki (Qi) and means life force which has more connection to my coaching site than to this one.

Back to the drawing board…

James Chartrand – Men with Pens says September 28, 2008 at 8:53 pm:
Drawing boards are good. We revisit ours periodically as well 🙂

By the way, this response was funny as hell. Good on you, Bengt!

Bengt says September 29, 2008 at 5:37 am:
@James, Thanks, I really enjoyed writing like this. Which of course means I should do it more often

Toni says September 30, 2008 at 6:44 am:
Great response to the drive-by. They can be brutal, but they’re always right. I always visit a scheduled hit before they review it and they pick up on the key items that irritate me (and since I’m brilliant, that means they must be right!) Keep the faith and keep up the good work.